Another Saturday, another hike…or at least that is the goal!   Today Marissa, Ross, and I tackled a different section of Mount Falcon Park, this time from the west parking lot.

I failed to have a map with me, so we missed one segment on Tower Trail that I wanted to do, but with three dogs in tow, it was likely best, as getting tugged up and down anything steep would have been less fun.

We started out on Castle Trail and hiked to the ruins of John Brisben Walker’s castle which burned to the ground in 1918 after being struck by lightening.

Walker was a true Renaissance man.  He bought and sold the Cosmopolitan Magazine after increasing its circulation from 16,000 to 400,000 in six years; he built the longest COG railway in the world to the summit of Mount Morrison; he manufactured several models of automobiles and sponsored the first automobile race in the USA; and he invested in land including Mount Falcon and Red Rocks to which he built a road and trails, and promoted the venue as acoustically perfect for concerts.  These were  just a few of his endeavors.

After visiting the jagged, stone ruins, we moved on, following the undulating path through intermittent evergreen forest. The difference in the west side and east side of the park is pretty amazing.  The east side is much more desert like relative to the west side which is peppered with pine trees.

We were also lucky to find protection from the high winds on this brisk morning.  In fact, it felt much windier in Denver than at the park.  We went from donning gloves and a wool hat to stopping for water by the time we reached the sun drenched Parmalee Trail.  The cool temperatures, however, kept the wildlife out longer, and we spotted a few deer! 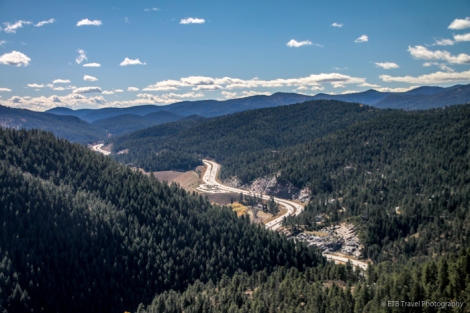 The dogs loved the hike as well, especially when they stopped for pats from all the volunteers working on the trail today.  After our short, two-hour hike, we stopped for lunch at the “World Famous” Sit-N-Bull.  It was 12:30pm, but only breakfast was being served.  OK, that was fine…I love breakfast, though I think having a beer with eggs was a first for us.  ETB

WANT TO VACATION SOONER?  IF SO, THIS VACATION CLUB IS FOR YOU!

Get the gist here: http://www.ratpacknation.net/pages/can-i-do-it

For notecards, key chains, or photographs, visit Notable Notecards or Niche Notecards on Etsy. A portion of the sales are donated to charity and a travel story is associated with each one.